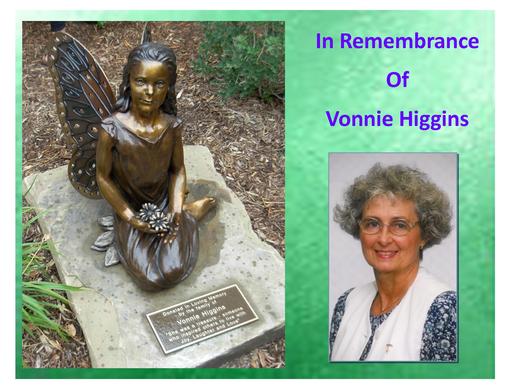 The bronze sculpture depicting a "garden fairy" was commissioned by the family of the late Vonnie Higgins, a longtime employee and volunteer at the hospital, and given to the BCH Foundation in her memory.  The dedication took place on July 15, 2016 which would have been Vonnie's 81st birthday!

Sondra L. Jonson of S.L. Jonson Studios in Cambridge, Nebraska created the piece to celebrate Vonnie's life and recognize her work and family, her service to others, and her love of gardening. Shortly after Vonnie died in October 2014, her family began making plans to honor her with a bronze statue that would be placed on the grounds of the hospital.

"We wanted something that would be permanent," said Pam Peterson, Vonnie's daughter.  "We hope it will make people smile.  The healing garden is the perfect place for this sculpture.  We hope it inspires others to live with joy, laughter and love."

The unveiling and dedication ceremony attracted a large number of attendees including family members, former co-workers and lots of friends.  Vonnie Higgins worked for 33 years in human resources at BCH and volunteered for another 10 years at the hospital's hospice program, immunization clinic and gift shop.

A reception following the dedication was held in the hospital cafeteria.  It featured "chocolate chip cookies" - one of Vonnie's favorites.

© Beatrice Community Hospital Foundation, 2022. All Rights Reserved.
This website is for informational purposes only and not intended as medical advice or a substitute for a consultation with a professional health care provider.
Privacy Policy | Non Discrimination and Language Help | 990 Financial's